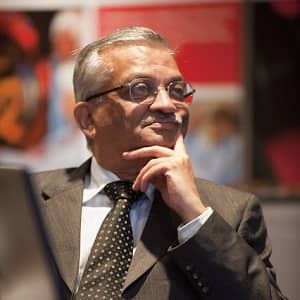 “World needs to recognize, that unless and until the development aspirations of all the countries in the world are assured, we are unlikely to find a viable solution to Climate Change.”

Anil Kakodkar joined the Bhabha Atomic Research Centre (BARC) in 1964, following the one-year postgraduate training with top rank in Nuclear Science and Technology in the then Atomic Energy Establishment. He became the Director of BARC in the year 1996 and was the Chairman, Atomic Energy Commission, and Secretary to the Government of India, Department of Atomic Energy, during the years 2000 -2009.

Anil Kakodkar has worked for the development of the atomic energy programme in India throughout his professional life. Undeterred by the restrictions imposed by the international community, he succeeded in developing various systems for the pressurized heavy water reactor, in building the Dhruva reactor starting from the conceptual stage, in rehabilitation of Madras Atomic Power Station Units 1&2 both of which at one stage appeared to be on the verge of being written off following failure of the moderator inlet manifolds, in conceptualization and development of Advanced Heavy Water Reactor that realizes the next generation objectives through innovative configuration of present-day technologies besides use of thorium.

Anil Kakodkar has been a key contributor to India’s strategic programme. He was among the chosen few involved in the first successful Peaceful Nuclear Explosion Experiment that India conducted on May 18, 197,4 at Pokhran. And later, he played a key role in the series of successful Nuclear Tests conducted during May 1998, again at Pokhran. India also demonstrated nuclear submarine powerpack technology under Kakodkar’s leadership.